While I was traveling in Patagonia two years ago, I found myself in the lovely town of Ushuaia. During one of the tours I took when exploring the region, I was told a story. A story about our Canadian friendly animal- the beaver.

For those of you who don’t know what a beaver is, the beaver is Canada’s largest rodent. Beavers have a thick fur with a flat tail. They live near slow-flowing streams where they construct dams out of logs, debris and mud. This animal was once considered most valuable for its fur during the fur trade in the 16th century. This being said, in 1946, the beaver was introduced for the first time in the Southern Hemisphere when beavers were shipped to Tierra del Fuego (Argentina). 50 beavers were on their way to Patagonia because some greedy businessmen wanted to setup a fur trade in the area. There was one problem though: The beavers did not have predators in that region and so, the beaver population exploded. And now what? There are more than 50,000 beavers wandering around in Patagonia. And the consequence? The beavers are destroying the forests in the region. Dams are obvious when hiking in the region of Tierra del Fuego. 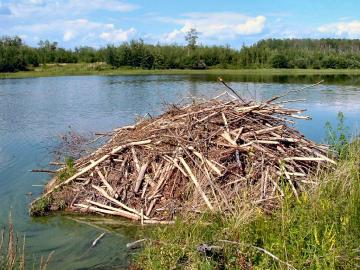 Lesson to be learned: This is what happens when humankind messes with nature to make money! We have no business moving animals accross the world to make money off of them. They’ll just come back and bite you in the bum for doing so!