You Are Here: Home » Backpacking Destinations » All Roads Lead To Rome

All Roads Lead To Rome

Just as Tanya was hooked on the “Waving Flag” song by K’naan, I am presently hooked on a T.V show called ROME. I’ve already stated in past articles about my love for History and Politics but this TV show is a drug. It’s so uncensored, brutal and realistic all at the same time. Most of us have already heard of or studied the Roman Empire. Just like the Greeks, the Romans are the true creators of ancient Democracy. Now, this TV show demonstrates how life was during the Roman Empire, how adultery and slavery was allowed, how politicians would bribe the Senate, and how favors would be exchanged between the Leaders of the Republic of Rome and its Senators or consuls.

Also, threatury was just as present in the past then it is now in modern civilisation. I think this show really demonstrates the reality of the political game. How one is to manipulate those around him in order to give to others, or how one has to satisfy the population, his allies and always be a step ahead of his enemy, who he too, can bribe the Senate to go against another person. 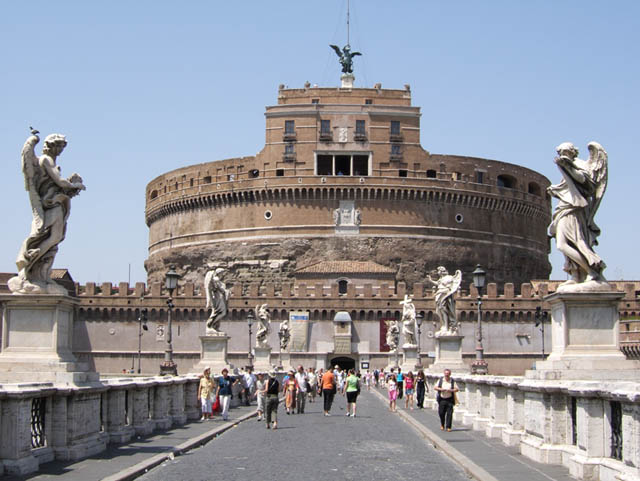 All this is  bloody interesting but, the question is again: What does this have to do with backpacking right? Right. Well when backpacking Rome, you can relive these moments by visiting the old Roman prison of Castel St-Angelo, the old ruins of Rome and especially the colosseum, where the games took place and gladiators, warriors and animals would fight till the last breath for the Emperor’s entertainment.

I’ve backpacked in Rome about three times now, and I never get fed up of it. I love Rome, it is one of the most amazing places I’ve ever seem. Imagine a city where modern life and ancient civilisation live together, that place is Rome. I’m sure a lot of the readers here have already went, since it’s a very popular city, but for those who have never been, I really suggest you visit those ruins and the city itself, it is breath-taking. Have a safe trip and don’t forget to come back to Off- Track Backpacking to share the memories.