You Are Here: Home » Trip Planning » Stuck in an Airport Overnight

Stuck in an Airport Overnight

Have you ever been stuck in an airport overnight because of a flight delay or cancellation? Or did you already book a cheaper flight to your destination where the second leg of your flight was only departing the next morning? These situations are most likely to happen once in your life. For those more frequent travelers, I’m sure it already happened multiple times. 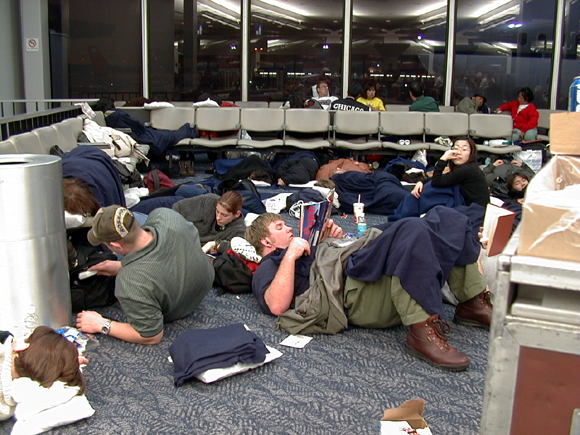 From personal experience, I learned that there is no point to get frustrated when these type of unplanned events occur. On my way to Ushuaia, Argentina a few years back, my overnight flight from Chicago to Buenos Aires got delayed until the next morning due to technical issues. We were given hotel vouchers but many flights were also delayed because of the weather and it was impossible to get on a shuttle to the hotel. Since we had already left the secured area and it was past midnight, they wouldn’t let us back in to the gates section. We spent the entire night sleeping on a chair in Chicago O’Hare Airport. I had a cold at the time, I was freezing and beyond annoyed. Not to forget to mention that we were also missing our flight from Buenos Aires to Ushuaia, which was booked as a completely different leg of the trip. Another instance, I was poor so my flight from Rome to London landed around 1am but my flight London-Montreal was only leaving the next day at 4pm. I couldn’t afford a hotel so I slept in the Airport. On my way back from Brazil last winter, my flight from Salvador-Sao Paolo was delayed so I missed my flight from Sao Paolo to NYC and I was stuck on standby hoping to get on the next flight to North America as soon as possible.

All this to say that if you travel a lot, you’ll eventually get stuck in an airport! How did I cope with it? Well, at first, I had lots of frustration. But through experiences, I learned to better plan my travels.